Now reading: The history of sari: The nine yard fashion
Share
Next

History and Origin of Saree

The word 'saree' comes from the Sanskrit word 'sati', meaning "a strip of cloth." It originated from the Prakrit word 'sattika', which was mentioned in Buddhist literature as women's attire. The saree is an unstitched long piece of cloth that is draped in various styles and can range in length from 4 yards to 9 yards. It has a rich history, with .The first mention of Saree was found in Mahabharata in 400 when Lord Krishna protected “Draupadi” by blessing her. The earliest form of the saree was found in sculptures from the 1st century AD, and was worn by heroines like Queen Laxmibai and Belawadi Mallamma in battles during the 1850s. They were worn like dhoti, with the added length enabling them to fight on horseback “Drauadi” blessed with a saree that did not end as mentioned in Mahabharata.

It is intriguing to learn about the evolution of the saree through different designs and styles, and the factors that have contributed to these changes, even though it is now considered a fashionable item
The earliest known evidence of the saree dates back to the Indus Civilization. One of the earliest documented accounts of the saree comes from a Portuguese traveller in the early 1500s, who described the garment as "white garments of very thin cotton or silk of bright color, five yards long, one part of which is wrapped around the waist and the other part is draped over the shoulder, leaving one arm and shoulder uncovered. With the Aryans came the word Vastram. In this period, they embraced the draping of cotton weaves and the drape and the fabric itself came to be called Neevi. It is also around this time that Pitambar and Patola came to be. With the advent of the British rule, that saree faced major changes in its draping. Petticoats and Blouses became an important part of the attire, to bring in more modesty in wearing the garment. Women above the age of 16 started wearing a saree. Young girls either wore a skirt and blouse or a half-saree. Women in the north embraced the salwar kameez. Women of marriageable age always wear a saree. After India gained independence, there was a significant advancement in the history of the saree. This period saw the emergence of various techniques for weaving, dyeing, and printing. Rural artisans and weavers developed skills that led to multi-faceted textiles achieving worldwide acclaim. Indian silks that were intricately woven, brightly printed cotton cloths, and hand-painted sarees were highly sought-after globally during this time. 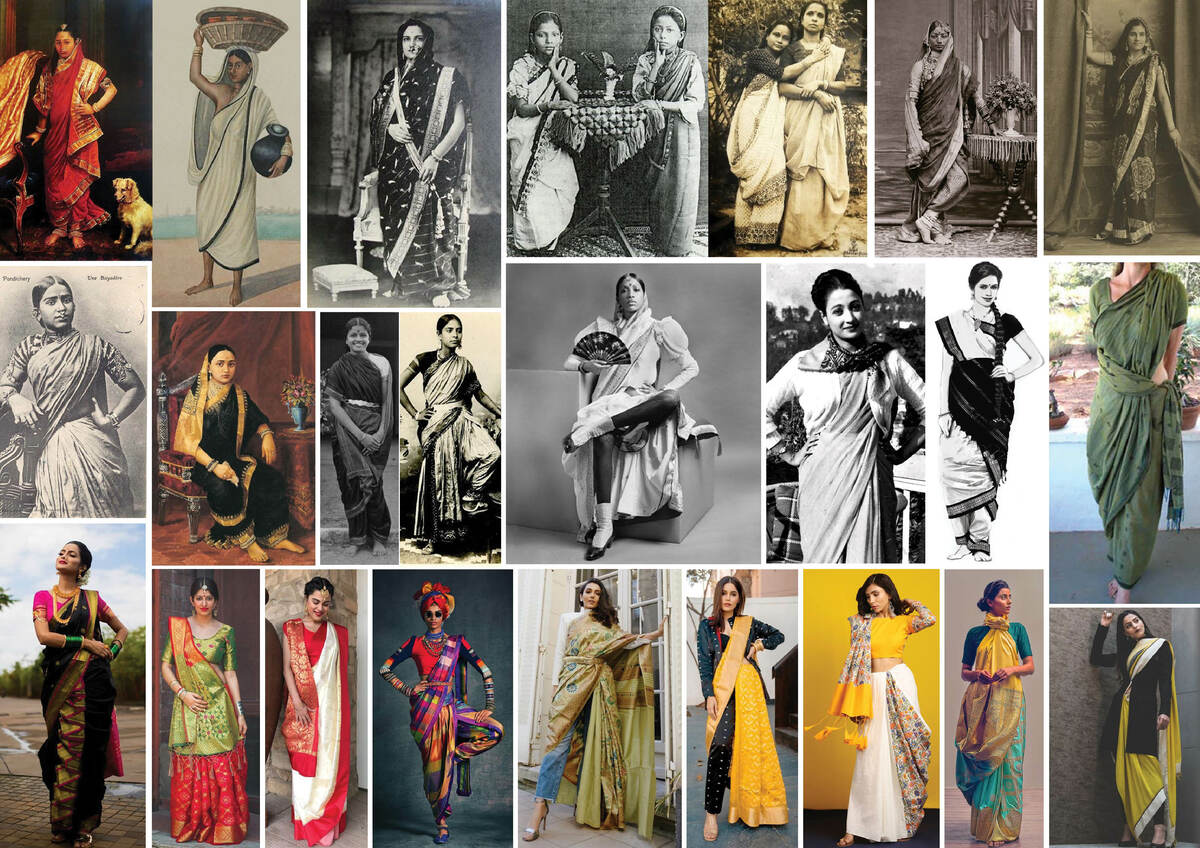 Over time, these sarees came to be known for their textiles, motifs by certain special names, like Ikkat sarees, Kalamkari sarees, Patola, Paithani and Kanjivaram sarees, Banarasi, Chanderi and Chikankari fabrics, cottons and so on. Till today, these are highly coveted amongst saree connoisseurs across the world.
Today, with the advancement in fashion, women and men everywhere are experimenting with drapes through the saree. Blouses are replaced by Coats and Jackets, Belts are introduced, to hold the pleat drapes better, sarees are even draped with pants and skirts below. Today, a saree has become an expression of who the person is and their style. The saree creates a picture of flowing grace that conceals as much as it reveals. Despite the difference in draping style, in different parts of the country, it still is a unifying feature. From a time when the saree was fast disappearing, with the Salwar and western wear taking over, today, women all over are now embracing the 6 yards of beauty in their own way. The saree stood the test of time, stood with us through thick and thin. To us, it represents a struggle that can not be put in words but like a scar we proudly wear.